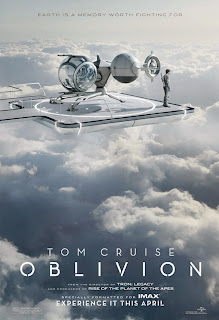 Sometimes, the fact that I have seen so many movies lessens the experience of watching certain films. Oblivion, staring Tome Cruise, is one such film. There are spoilers throughout this review, so just be aware.

Oblivion has many facets that feel like bits and pieces taken from other science fiction films that came before it. 2001, The Matrix, Terminator, Wall.E, Moon, Star Trek/Borg and even the 1980s cartoon, Thundarr the Barbarian. Having aspects or elements in any story that are reminiscent, gleaned, borrowed, homaged, or otherwise ripped off from someplace else is nothing new. All of the aforementioned obvious sources were themselves borrowing from earlier stories. Even the great Stanley Kubrick himself never wrote original work, but would always use source material as the jumping-off point for a fresh, new take on an already seemingly overdone topic; ie, war, horror, sci-fi, etc. So yes, Oblivion is not entirely original. The film did suffer from feeling too cobbled together form various sources. But more importantly, was it any good? From my perspective as a science fiction loving geek/nerd...yes. It certainly could have been better. It was not perfection, but it did have aspects of it I enjoyed greatly and it lacked some of the more typical and often overused elements in science fiction films—which is a good thing. First, there were no slimy aliens running around trying to eat humans. Second, there were no giant space battles. Third, there were no crazed, dark antagonists hell bent on chaos and destruction. Sci-fi films are overrun by those elements, and I was happy to see none of them present in this movie.

The film was often quiet and took its time. I liked that too. Many science fiction films never sit still and just feel panic-stricken. There were a few too many chases and action scenes tossed in that I could have done without, but not too many that it caused the film to drag. Even the film’s end, with the flashback/climax, managed to steer clear of the typical Michael Bay SFX computer-generated fructose tsunami that usually ends many a sci-fi film.

The trailer is partially to blame, leaving some of the spontaneity missing from the film. I knew that there were no flesh and blood aliens and that is was a group of humans led by Morgan Freeman. I also knew there was a robot/AI/whatever behind what was going on. The trailer could have helped this some by not showing the underground humans at all. Too much was revealed, to me, before I even saw the film. The reveal in science fiction has become more important than the film itself. Oblivion definitely contains a substantial reveal, it does not rely too heavily on it.

Ultimately, I came away having enjoyed the film. It has rewatchability, and that is more than many films these days can say. I'd never sit through Looper again. It was also stunningly beautiful, and cinematography is a category in cinema that is often overlooked. Just being able to sit back and gorge one’s eyes and mind on beautiful photography, accompanied by a great score, seems absent from what is expected from films these days. I think Terrence Malick's Tree of Life woke up many filmmakers, and I am beginning to see traces of it in other films. Oblivion, Prometheus, and even the upcoming After Earth seem to take note of the importance of great cinematography in a film. SFX junk is just a tool, and all the explosions and space battles in the world will not make a film any better. But something that is gorgeous in and of itself, even if you were deaf or did not know English, still has vast merit. Oblivion scores high here. The music was great too. I noticed it, which is more than I can say for 98% of what I see these days. Years ago I used to fall in love with so many films scores. Today film music is rarely even worth a one-sentence blurb. Music is very important in a film. Great music can aid a film tremendously. Why this is overlooked more and more and just slapped on is a mystery to me. Films take humanity’s great artistic achievements and incorporate them all together. When done well, the end is greater than the sum of the parts. Blade Runner is a prime example of great music accompaniment. Without the Vangelis music, Blade Runner would not be the same. The music in Oblivion fit the film and had me considering picking up the score—a rarity these days.

There were aspects of the film I did not like and/or was also unclear about. The clone thing was not needed, and was already done recently in Moon. The opening voiceover was not needed. It felt added on. Show me, don't tell me. It just felt a bit like misguided filmmaking to me.

The iconic New York locations were lame. It looked cool, but seriously, what are the odds that the film’s protagonist, a diamond-in-the-rough of clones, would also be located near the most famous city ever? Sci-fi needs to steer clear of big cities from now on.

Couldn't the drones have other drones to fix themselves?

Sally/Tet was revealed as so powerful that the number of drones seemed inadequate compared to amount it could have produced.

I was unclear why an army of M/F clones were needed. An army of drones to kill all the humans would seem to me to be more efficient. Maybe this was unanswered on purpose.

Was Sally/Tet an alien originated AI, or was it of human origin? I guess it's OK that this is unanswered, or if it is answered I missed it the first time around. The sucking up water thing was lame. Water is made of two relatively common elements, hydrogen being especially common. No advanced anything would need it, nor travel here for it. A more real, well-thought-out purpose was needed for the Borg/AI in this film. If the AI was of human origin, then the water thing needed more explanation. The idea of having the AI of human origin and created for a goal humanity set out is interesting. It carrying out some earlier order to collect water to be taken elsewhere by humans is interesting. If the AI went nuts and killed humanity, and continued blindly drying out earth for an old standing directive, well, that is cool too. Either I missed something, or perhaps—and I hope this is the case—that the film was intentionally left open-ended enough for my theory to find a home. When everything is explained perfectly, then only that explanation is what you will come away with. When a film is slightly open-ended, then the sky’s the limit.

For me, Oblivion was a strong 6 out of 10. The SFX, music, acting, and photography were strong and helped the film become something beautiful that need not be enjoyed or disliked on the strength of the writing alone. And that’s a good thing, because the writing was lacking. A slightly better screenplay could have aided this film a lot. I do want to see it again, so it’s possible that some of my questions might be answered. It was still one of the stronger non-comic book science fiction films to come along in a while.