Apple Watch OS2 just dropped yesterday. Better late than never. There are a whole lot of new features that Apple has put into the watch. You can get is straight from Apple right here. I'm not going to go into much detail about all of it. Most of it will never be used by me, or it is not relevant right now.

I do still feel the app selection for this new and powerful watch is pretty poor at best. Many of the apps try and do something that does not need to be done. Simply forcing your iPhone app onto the watch just to, well, you know, have an app on the watch, is well, you know, lame beyond belief. Just don't do it. People don't sit and futz with their watches. They quickly glance at them for information. Any app that requires I use that tiny watch screen for anything more than a few taps is missing the point of the watch.

I made a few gaming suggestions here. I have found a few dice rolling apps so far. Nothing that's blowing my mind though. Nothing where I can shake my watch arm and get dice rolls from that movement. Until that app exists, dice rollers will be less that optimal.

One new feature I will mention is the ability to add photos as a watch face. Aside from adding your own photo there is zero customization. That's lame. All the other ways to customize date, time, sunrise, battery life, etc should all be allowed on the photo faces. Also there should be the ability to move the information around the screen so that depending on the layout of the photo, the date and clock information will not cover certain parts of the photos. Of course, if you know how to use Photoshop you can get around this, but a little more customization built in would be nice. Being able to change the information colors too would be a good thing. Here are some faces I tested out using photos from the Internet and one or two of my own. 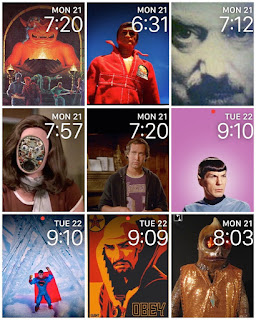 The other cool feature that I used right away was nightstand mode. If you place the watch on it's side while charging it will go into nightstand mode and become a bedside clock. The lameness here is that it does not stay lit. All real world nightstand clocks stay lit all the time. I'm not sure why Apple won't let the face stay on all night. Maybe the screen will burn? If you touch the face or hit a button the face will illuminate. It's a nice feature but just not there 100%. 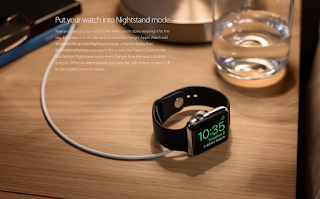 The last feature that I used right away is the ability to send multicolor sketches to another Apple Watch user. So far that's just my wife. She has not upgraded her watch yet and has only been getting my multicolored art as a single color. So be aware that multicolored sketches you send will not be seen unless all parties upgrade. The non-upgraded user will receive the whole picture in the last color you chose. This multi-color upgrade is not an earth-shattering feature, but it is fun. Here are two of my lame multicolor sketches I sent to my wife. 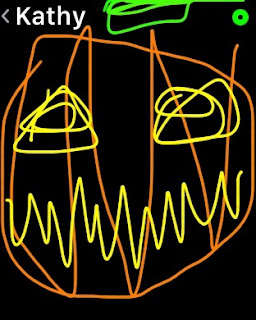 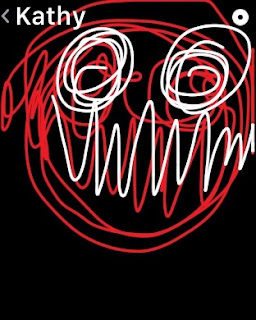 Hopefully soon there will be more apps and the few new useful features that have been added will be tweaked to make them better.

Posted by Adam Furgang at Tuesday, September 22, 2015 No comments: