About a week ago a close friend saw online that The New York Times was requesting "readers' images that capture what it's like to grow up in the five boroughs." She knew I grew up in Queens, so she sent me the link.

Only a few weeks before this I had finally gotten around to picking up a negative scanner so that I could get many of my older film images digitally-scanned and online. When I saw the Times request, I had conveniently already scanned many of my old favorites. I submitted two shots to The New York Times.

After my submission, I sort of forgot about it. Then, in under a week, I was contacted by Amy Zerba at the Times, asking for more information because the shot of my friend Mike and I had been chosen. It appeared online this past Friday. Scroll down on the Times web page link to see my picture. Today my photo was in print in The Metro Section.

Not too shabby? Needless to say, Mike and I are thrilled that we made it in. We were 16 back then. God, time flies.  —AF 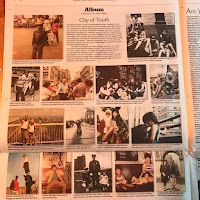 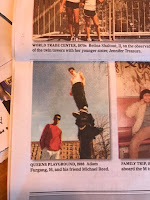