Smartwatches are taking off in a very big way. Motorola, Samsung, LG, Microsoft, Asus, Pebble, and Apple all have smartwatches on the market. I own the Apple Watch, which despite some rather nifty notification features, has a lackluster app selection so far. I know apps are subjective and one person's killer app is another's entirely unnecessary app. Still, my take on many of the current Apple Watch apps is that most are just gimmicky and useless regressions of far better iPhone apps. Why use the small watch for something your phone does bigger and better?

Smartwatch app developers need to start thinking outside the box to create apps that take the small screen into account.  Simple apps are needed and RPG games are a perfect place to start. I understand that many people like playing games the old fashioned way with pen and paper and such. That's fine. This is not an argument against traditional play. This is just a post about modern tech play and how modern smart devices can aid, or be used for, traditional games. As a gamer I have a few ideas for apps I wish already existed. I did a few mock-ups to help illustrate what could be...

Dice Roller: A nice RPG dice roller app for any smartwatch could be simply awesome. Choose the dice you want to roll, then shake the watch or spin the crown, and presto! The dice randomly rolls and settles on the result. Multiple dice could be gathered for more complex rolls. Most smartwatches lend themselves perfectly to this task. Since many smartwatches are tethered to their phones, results could be displayed on a phone for all to see. 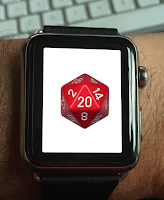 
Character Sheets: I know many serious RPG players use a zillion stats and complex income tax-style mathematical acrobatics to play games. Here at home with my kids we typically use HP, AC, SP and a few other basic abilities. Games tend not to suffer much from paired-down stats when imagination and storytelling excel. A simple character sheet with editable HP would be awesome on my wrist. I want this now!
Maps: Viewing maps on a smartwatch could be amazing. Imagine scrolling around a map with your finger or only seeing a limited view of a larger map. If and when all devices can truly work together, a DM can put a large map on a cell or tablet and players can see a portion on their watch.
Minis: There are thousands of RPG minis out there. An app for viewing a virtual mini for your character could be a lot of fun. If you play multiple games you could have multiple character minis stored so you could scroll to the one you are currently playing with. This idea could easily be incorporated into a character sheet app. Since I'm not a developer and I'm just tossing out ideas, I'm not sure how much can be combined in one app. My instinct with smartwatch apps is, the less complex the better.

Art: Players, monsters, non-playable characters, items, settings, etc. could all be displayed on a watch. Traditional modules could be created, very simply, so a DM could run a game from a phone and text or communicate small bits of information and images to players. A module app that loads small bundles of art to aid with storytelling and gameplay could be a lot of fun.

This short list is just what has come off the top of my head. Feel free to suggest other ideas. Remember to keep it simple. Smartwatches are small and intimate and there is no need to stuff large concepts into such a small device.
Posted by Adam Furgang at Monday, July 27, 2015 No comments: 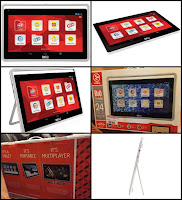 OK, this giant tablet is not perfect by a long shot, but it is cool. It's basically a BIG ASS Android tablet marketed for kids, although I'm already scheming how, exactly, I'm gonna use it. There are two models, a $400 20-inch model and a $500 24-inch model. I picked up the 24" unit at Best Buy. They have a 14 day return policy.

Although this is sort of a family purchase, I basically got this for my 8-year old son. Previously, he'd been using an old hand-me-down Apple laptop to do his online interactions. The nabi Big Tab HD is suited for kids, and the size will not let them go blind while playing online. It's perfect for my son, and he took to it like a duck to water. I had previously set him up with his own Gmail account, youtube account, etc. I needed to use these to get the tablet up and running.

Despite having never used anything but Apple products I needed to only give him a 2-minute lesson and my son was off and running.

The tablet is made and intended for kids, so it has cumbersome security features that we're not using. There is a parent mode and a nabi kid mode. We keep the tablet in parent mode and it's just easier that way. I made the passwords fairly simple so my son can remember them. A password is needed to switch modes. This way I am not needed if the modes are switched by accident.

There is zero danger of any purchases being made on this without my knowledge because I used a pre-paid $25 Google card that I bought at Target. We downloaded a few apps together, like Minecraft and others, and then I explained to my son that there is only a certain amount of credit remaining. I have instructed him to come to me when downloading another app that costs money just so he does not make a mistake. I know he will listen to me, but I'd not suggest this for everyone. Each kid is different, and only a parent can truly know or predict how one's child will behave with technology.

In addition to getting this tablet for my son to browse the web and watch youtube on, I also got to hoping we could all use the unit as a flat screen map to play RPGs on. The verdict is in and it's great for that. Maps can be easily scaled by pinching the screen and any jpeg you want can be loaded onto the tablet for easy access. As well, maps can be used so that players do not see the entire map all at once. You can scroll to off screen parts of the image or simply place black paper over parts that can't be hidden off-screen. Plastic minis can go on the screen with zero problems. Metal-based minis can be used carefully. If you are worried about damaging the screen you can get a screen protector for either size model.
This unit has an aftermarket cable that will allow USB to be plugged in so external storage can be accessed. I have not tested this aspect yet, but when I do I'll add to this post. I did find it kind of crummy that the cable, only $8 on the nabi website, was not included with the tablet. A cheap cable like that should be in the box!

Selling the product with no HDMI cable is a huge oversight. Allowing a unit this big to be used as a TV, too, would be a big plus and would make it more attractive to parents looking for an all-in-one unit that accomplishes all a kid could want. My son is bummed that he cannot attach his PS3 to the unit. Any company that thinks less access to their device will help sales for proprietary apps for the unit is nuts. The more useful a device, the more likely it will be that people will buy it.

A big elephant in the room is that the camera on our nabi Big Tab HD 24" never functioned properly. It only shoots a partial image. My son couldn't care less about the camera, so it's not an issue here but I'm still waiting to find out what nabi will do for us. I called them earlier today. I was on hold for almost 20 minutes before I was connected to a person who could not easily answer my HDMI question without talking to a supervisor.  :/

Using the tablet flat on a table is a great experience and there are a bunch of 2-4 player games that kids can play head-to-head like air hockey. A hungry hippos-style shark game is also fun for the kids.

Overall this is a very cool device that seems a bit too expensive. In order for it to be a hit, the quality and connectivity issues must be addressed.
Posted by Adam Furgang at Friday, July 24, 2015 No comments: