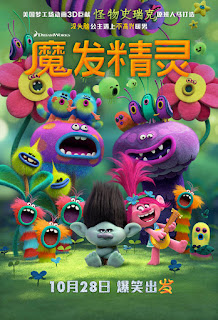 Trolls was not on my radar. Not even remotely. My boys are 16 and almost 10, so the film disappeared in my blinders like a thousand other things out in the wild that become invisible because of their sheer ubiquity.  But one night when I was watching trailers on my Apple TV, my youngest son asked to see the Trolls trailer. I obliged him but paid it little mind, mostly because it was still off my radar, and because of the torture I endured when sitting through films like Doogal back in the day...way back when I took my oldest son to see everything when he was younger.

So fast forward to the other day. I'm in Target and I see Trolls, so I grab the bluray for my son. I knew he wanted to see it, and he's typically not into asking to see too many films. I still figured I'd just give it to him and that'd be that. Trolls would likely be seen by him and vanish onto his shelf with Sponge Bob and other kid movies. Now I want to explain here that I love kids' films. I am a huge fan of most Pixar films, Hayao Miyazaki films, Monster House, Wallace and Gromit, The Iron Giant, and more.

Trolls, I assumed, was not going to be a great kids' film. It just seemed like the huge amount of excess chum that gets developed and made. Another property to generate toy sales, etc. And it definitely is that, but it's more than that too. Trolls, in my opinion, is operating on multiple levels. Many kids' films do the kid humor thing and also have jokes in there that only adults will get. This is because adults make these films and they insert humor for themselves and the adults they know will be seeing the film with their children. That's why some of the better kids' films are awesome. They cleverly operate on this dual level and keep two age groups entertained simultaneously. Trolls does this masterfully, especially with music.

On the surface Trolls is a simple story about a group of bad giants called Bergens. The Bergens want to eat the happy colorful trolls, like pills, to be happy. One angry, melancholy troll, Branch, warns the extra happy troll queen, Poppy, that they are too complacent, and the Bergens will catch them if they are not careful. Fast forward and many get captured, so Poppy and Branch need to team up to attempt a rescue. Seems simple enough. They also find a miserable Bergen named Bridget. She's the nicest Bergen, but all the other Bergens crap on her constantly. She is secretly in love with another young Bergen, Prince Gristle. This is where the film trends into interesting territory...

A few trolls help Bridget and make her look prettier. With their elongating colorful troll hair, they make her a wig. While on her head they also coach her what to say to Prince Gristle to give her confidence. This is extremely reminiscent of Ratatouille and Inside Out, in which characters in or on someone's head help them in some way. In Ratatouille, Remy helps Linguini and they form a mutually beneficial relationship. In Inside Out, different emotions help a young girl, Riley, as she goes about her day-to-day activities. When a few emotions go missing, Riley exhibits erratic and depressing traits uncharacteristic of her. In Trolls, all the Bergens are eternally depressed and miserable. They feel something external that they eat (little happy colorful trolls) will make them happy. Eventually, the small group of happy trolls help Bridget to get confidence and not be gloomy. In the end they help all the Bergens to break free of endless sadness they only feel can be fixed by eating trolls, and they realize they can be happy from inside with no external help.

Along the way, Poppy gets sad and turns gray, and all the trolls turn gray along with her. Branch finds his inner happiness and helps Poppy to break her sudden melancholy during an awesome cover of the Cyndi Lauper song, "True Colors." In the end the Trolls and the Bergens are happy—all except Chef and one troll who betrayed the other trolls. These two bad apples/emotions get eaten at the end by some giant creature.

Overall I find the film to be about various forms of depression and possible solutions.

I enjoyed the film, the story, the sub-stories, the mostly retro music, and the characters. The next aspect I loved is the look and feel of the film, which I feel is an amazing end result of decades of fine art, pop culture, more art, more films, and more fine art. Below is a progression, the way I see it, from surrealism, to Dr. Seuss, Mark Ryden, and onward, each influencing the next either directly or indirectly.

I feel Trolls is an unintentional surrealist masterpiece that's the culmination of decades of art each influencing the next. As I watched the film, I could not help but wonder what the original surrealists would have thought of the film if they could have seen it. If you can watch the film and try to remove any modern frame of reference in understanding it's a kids' film, it becomes entirely absurdist and almost abstract. Watching the film and absorbing the simple story, the subplots, the music, the look and feel, the compositions, the hyper-real computer animation, I concluded the film is an artistic masterpiece. As popular culture and art continually eat themselves and produce more and more absurdist films like these—films that are not as self-conscious and self-aware as films geared for adults—I think greatness can unintentionally result, as it has here.

Check it out. I could be wrong, but I still believe it anyway.

Posted by Adam Furgang at Saturday, February 11, 2017 No comments: