FujiFilm instax, Leica Sofort, and Instant Cameras after the Death of Polaroid

Instant photography died, sort of, back in 2009 when Polaroid announced it would be ceasing production of its film. Back then I helped to organize a small Polaroid show as the brand passed away. Eventually the Impossible Project would resurrect Polaroid, sort of, and produce several new film stocks along with vintage cameras, and even a new one. Although the brand and existence of Polaroid is still around, it is not the same. Polaroid, back when Warhol used it, was not just cool because of its instantaneous, shitty, mushy quality (now imitated ad infinitum digitally), but because it was available everywhere. You could find it at drug stores, rest stops on the Jersey Turnpike, Target, Walmart, gas stations, etc. It was used by relatives who cared little for photography until they found themselves at a graduation or a birthday party, and would stop en route to grab a pack or two of Polaroid film. While the Impossible Project is awesome, it is prohibitively scarce, only available online, crazy expensive, and by becoming exclusively artsy, it loses the ubiquity that made Polaroid Polaroid.

Now all is not lost for the common folk wishing to jump onto the instant photography retro train without pissing away $27 for 8 exposures of 600 type film that used to cost $8 only 10 years ago. Like vinyl at Barnes and Noble, instant photography, too, is having its resurgence. Fuji, which has always made instant film alongside Polaroid, has a few small cameras available. Polaroid too, (I'm unclear about the commercial distinction between Polaroid and the Impossible Project) has a couple of cameras that shoot either the new zink paper prints or the more traditional prints that roll out with the familiar white frame. The Fuji instax film that's commonly available is smaller than even the traditional 600-style Polaroid film. The current image size is roughly 2 1/2" x 1 3/4". It's markedly smaller, but that's fine. The quality is good too, and the prints with the white frame are approximately 3 1/4" x 2 1/4". Nice and small for carrying around. And since digital, cell phones, and Instagram seem to have the market cornered with square format images, it's nice to get some horizontal images with instant cameras. Also, because the film is smaller than traditional 600 Polaroid film, the cameras available that take the FujuFilm instax mini film are smaller and flatter, too, than the old bulky Polaroids.

You can find a whole range of instant cameras on Amazon now, even classic Polaroids. But if you want to use common film—the stuff that is sitting on the shelves at Target or Best Buy—you will want a camera that takes Fuji Instax film. The zink cameras are common too, as is the film, but it's new technology, not retro. The Fuji cameras come in several different models. Some are retro-styled, some are more bubbly and kid-like. 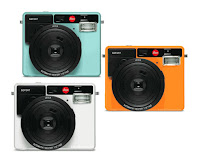 The new crown jewel for the newly-emerging retro instant camera market is the Leica Sofort. It's $300 and more than twice the price of the Fuji cameras that take the exact same film, but the Leica Sofort is a thing of beauty. It feels like an old Instamatic and a Polaroid had a kid together. It comes in three colors and Leica will even be selling its own black-and-white and color film. Remember though, the very common Fuji instax film works perfectly well in the Leica Sofort. The Sofort has a simple LCD screen for its few easy-to-grasp settings. There is even a mirror on the front of the camera to help you take selfies, because that's what we all do now. I've also read that the Leica Sofort is a rejiggered, rebranded rework of the Fuji camera. That's fine. If you don't want to drop $300 no one will force you. Grab one of the Fuji instant cameras instead.

If you want to plunge into the instant photography world, now is the best time. You'll find easily-accessible film, several camera companies to choose from, and you'll also have the ability to introduce your kids to the vintage visual medium that Warhol, Basquiat, and Hockney elevated into an artform decades ago.