So what's the newest latest thing trickling down from Japan into the American pop culture pipeline? 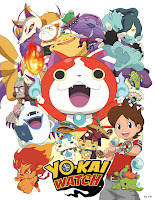 Yo-Kai Watch is a Pokemon-esque RPG video game created by Level-5 for the Nintendo 3DS. The game was first released in Japan back in 2013 and soon became a big hit. The game revolves around a boy named Nathan Adams (think Ash Ketchum) who uses a magical watch that allows him to see ghosts, or Yo-Kai—in Japanese folklore ghosts are called Yōkai. If they choose, players can also play a female character, Katie Forester. As players explore, they can use friendly Yo-Kai to battle unfriendly Yo-Kai. Searching for friendly Yo-Kai and puzzle-solving are also part of the gameplay.

After the success of the 3DS game, a wave of spinoff media were created. Toy figures of varying sizes, a physical Yo-Kai watch, an episodic anime TV show, an animated film, and a manga comic have all been produced. Yo-kai Watch 2, a sequel to the first video game, has already been released in Japan and Yo-Kai Watch 3 is already planned for a summer 2016 release. The anime TV show was first released in North America back in October of 2015. Viewers can watch it on Disney XD weekdays at 5:00pm. A well-produced Yo-Kai Watch website can be found here.
The toy watch is incredibly bulky, even for an adult wrist, but kids seem to enjoy this. Wearers of the toy can insert Yo-Kai discs that say unique things from the watch's speaker. Each disc has a QR code that can be used in conjunction with an iOS app, Yo-kai Watch Land. It is also available for Android devices. I tested this app on my iPad and was able to read the QR codes as well as generate 3D virtual Yo-Kai characters that sat on the discs we held in front of the iPad/iPhone camera. Pictures can then be snapped of the characters, which really impressed my son.

At first, I doubted the popularity of the Japanese game property in the US but I grabbed the game and some of the products for my son anyway because I thought they looked interesting. That same day he came home from school telling me another friend was wearing the toy Yo-Kai Watch in school all day. Grassroots word-of-mouth at the schoolyard level combined with the huge amount of media available in the US could easily propel Yo-Kai Watch up into the next level of smash hit popularity. With the amount of content already created in Japan that only needs dubbing and/or retooling for release in the US, I'd say the entire property has a very good chance of catching on. The 3DS game is well made and has very nice animated cutscenes. The anime TV show is of high quality, and it's on often enough on weekdays and weekends that any kid or adult fan will easily have enough content to absorb. I'm sure it won't be long before the Japanese animated films are dubbed and released here in the US.

Anyone looking for Yo-Kai Watch games or toys can find it at Toys R Us, Target, and Amazon.com. I even spotted a Yo-Kai Watch stand-alone toy display over at Barnes and Noble the other day. Your quest to find all things Yo-Kai Watch should not be too difficult.

Posted by Adam Furgang at Tuesday, February 02, 2016 No comments: