The End of Toxic Star Wars Fandom
By Adam Furgang 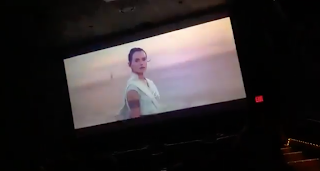 Now that the nine-film Star Wars saga is behind us, I’m happy. First and foremost, I’m happy for myself, my family, and my friends. Something we love has come to a satisfying close and we can discuss and appreciate it. It’s over. It’s wrapped up. It’s finished. Was it perfect? No. But not much in life ever comes close to perfection, and Star Wars is no exception.

I happy and hopeful for something else, too. I’m hoping that the end of the nine-film Star Wars saga will end or diminish the current state of the toxic Star Wars fandom.

I was seven when I first saw Star Wars: A New Hope in 1977. I was living in Queens and the world was very small to me then. Toys and consumerism had not yet gone supernova and films were hardly even on my radar as terribly important yet. What little media I had absorbed at that point was just serendipity, coincidence, happenstance, and osmosis all working together. I played with Micronauts and watched Land of the Lost and cartoons on TV. In short, I was just a vessel waiting for Star Wars to come along and wake me up. I didn’t dig sports. I wasn’t an outgoing social kid. And I wasn’t terribly focused on anything in particular. Once Star Wars came out everything for me changed. Suddenly I knew who I was. I started playing creatively. I started collecting Star Wars toys, to possess them yes, but also to keep the narrative story going in my mind. I started drawing, tinkering, crafting, building, and eventually writing. I also started reading in earnest. Star Wars comics, and The Splinter of the Mind’s Eye (1978) helped keep the narrative going too.

My parents happily indulged my love of Star Wars with pretty much everything there was that existed at the time. I had almost everything. All the action figures, toys, die cast, large figures, stickers, bedsheets, comics, etc. I even had The Art of Star Wars book in hardcover. That book with its sketches and possibilities of what may have been as the film was constructed was the most valuable thing to me. It showed me, with pictures, that Star Wars was never just one way. It was a creative process. A tinkering that took place with inputs from many people. Despite my age, The Art of Star Wars was instrumental in showing me that I could become one of those many people who contributed ideas and added to what Star Wars was, too. If I could somehow download what my brain did with Star Wars between 1977 and 1980 before ESB came out, I’m sure it’d be the finest Star Wars fan fiction ever made. In my own head I was unimpeded by any conception of constraints. Those years were the finest years Star Wars has ever given to me.

Once The Empire Strikes Back came out, Star Wars exploded like never before. The toys available increased. The media increased. And everything in the world started to speed up in a new way. In 1979, 1980 and 1981 The Black Hole, Flash Gordon, and Raiders of the Lost Ark came out. Dungeons & Dragons was also beginning to emerge at that time, too. More was happening and Star Wars became less of a singular focal point for me. Despite Empire Strikes Back being phenomenal, the series had a second part, a direction, a continued live action story (with unresolved plot issues no less), and the vast imagination I had between 77’ and 80’ was washed away by the story George Lucas was telling me. I loved it. But nothing Star Wars from then on would ever equal the magic in my mind from those first few years after the first film came out and before ESB came out.

Star Wars changed everything. The films that came out were all altered by Star Wars. TV was altered by Star Wars. Consumerism was altered by Star Wars. Even D&D had some space-related adventures as well as Gamma World. So, the world was like a cracked and scrambled box of eggs after Star Wars. And as ESB and eventually ROTJ came out, the initial phenomenon faded and gave rise to what is now common today, not just for Star Wars, but for everything. Endless never-ending content and media. Zillions of toys. Infinite properties. Video games. Novels. Comics. Conventions. And consumerism gone into mass production plastic overdose. I myself had to eventually conclude that no more toys need ever be bought. I still fall off the wagon now and then. With two sons to fuel my love of toys, my basement is filled. But thankfully we (mostly) ended the plastic consumerism gluttony.

World media is now on speed, meth, cocaine, LSD, and weed all at once. Everything has become blended together in a soup where nothing is inseparable from anything else. There are thousands of films, TV shows, video games, books, comics, and games. 1950s nostalgia has been replaced by 1980s nostalgia. The news media will discuss politics, Trump’s impeachment, North Korea, the latest iPhone, Eddie Murphy’s return to Saturday Night Live, and the latest Star Wars film almost all in one big run-on sentence. And a thousand other forms of media exist now to fuel any micro-interest anyone may have. If that’s not enough, you can create your own media, as I’m doing here, adding your voice to the endless Funko Pop jambalaya smorgasbord the internet has given rise to. Every fleeting thought anyone has can now be broadcast. Our current president does this constantly. It’s almost fitting too, at this time, that Trump’s the current president, as he is very much a representation of what everyone, to some degree or another, has become. We all have an opinion. We all have thoughts. We all have minds that flutter and flit around from thought to thought and notion to notion. Consuming vast amounts of content. Endlessly absorbing the latest films, TV shows, sports, products, gadgets, trends, etc. And then vomiting back a response, an opinion, a reflection, a reaction.

From my point of view the reactions from people about media and art has become very angry, jaded and cynical. Sentimentality, sadly, seems very much despised these days. Politics was a mess in the 70s. It’s a vitriolic shit storm now. Almost everything has become a vast fractured world of opinionated taste gone haywire with science, pseudoscience, opinions and moods all juiced together with the pulp discarded. Toss in climate change, economics, world politics and stir it all up and you have the current state of the world—a reality/virtual reality where the internet and social media have run everything and everyone into a corner, each feeling the need to explain some semi-cogent point of view about everything. And what’s the result? The result is a mess. The result is everyone is a critic. Everyone has become a nitpicking cynical angry know-it-all, thumbing their nose at everything. Art is no longer experienced, it’s shredded. Creators, no matter how passionate or sincere, are seen as shills for corporations who just want money. And films are decimated by behind-the-screen individuals who are second-guessing the corporations they are sure are trying to second guess them in some perverted, smug, gotcha game. Toxic angry fans are the new norm. Hate and criticism of things that society once enjoyed as escapism is the new normal. It’s depressing as all hell to me.

And Star Wars, something that once meant a great magical deal to me between 1977 and 1980 has become like a radicalized religion, with armies of splintered factions of radicalized “fans” all off in their own pissy soup of discontent. So, yes, I’m happy the nine-part Star Wars series is over. I personally love everything Star Wars. The worst Star Wars media ever produced is gold to me. It’ll always remind me of those magic years for me. I’ll never get angry or cynical about Star Wars. Movies and art in general are a great source of joy for me, not rage. And I know Star Wars isn’t over. Not by a long shot. I know it’s moving to where Star Trek has been for decades—into a corporate juggernaut. But I’m happy the 9-part Star Wars series has ended just so that, hopefully, the cynicism around it will die down. I’m hoping Star Wars can pass into history and just become another batch of films on a shelf. And I’m hoping that maybe, once in a while, I can have my own imaginative idealistic voice from childhood creep into my head regarding Star Wars, instead of some acidic, angry, toxic internet troll trying to tell me what to think.