The Death (and rebirth) of Retail 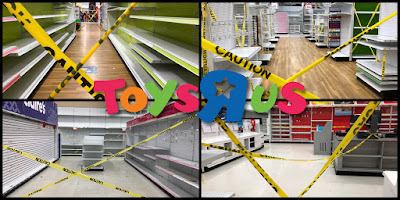 Toys R Us last year at this time.

Happy New Year! We all know the retail landscape is changing. It's no secret. We know most of the obvious reasons, too. It's Amazon. It's competition. And it's oversaturation. Within 12.6 miles of where I live, there are seven Walmart Supercenters. Within 13.5 miles there are six Target stores. These are just two of the big retailers in the United States. This does not take into account the two giant malls near me, or the many outdoor strip malls, or the fact that the city I live in, Albany NY, has only about 100,000 people. Albany county has about 300,000 people. That's not a lot of people to keep all these stores afloat. Now when times are good people may be inclined to go buy overpriced useless (seasonal) crap year after year. After a bad year or two, or just getting wise to the fact that much of what's being sold is junk we don't need, people just stop buying this useless stuff.


America is the land of excess. And as much as we want (and a lot we don't want) will be sold to us. You could go out right now and apply for every store credit card, sign up for every discount loyalty card, donate a dollar to every charity offered at the register, and stock up on useless decorations for every holiday celebrated in the U.S. The retailers will take your money and not even blink.That's the big picture.

The smaller picture is that more and more people, I suspect, are smartening up some. We are buying much less of what we don't need. And we are buying better quality of what we do need. I know everyone is not doing this, but I think a lot of us are. We are no longer getting punch drunk at Target and buying every faux artisanal pice-o-crap item that is displayed, (sometimes literally falling apart in the store) for our consumption. Our homes are only so big. Wall, mantle, and coffee table space is finite, and once reasonably decorated, we don't need to keep adjusting the decor.

With Walmart, Target, Lowes, Home Depot, Bed Bath & Beyond, K-Mart, and dozens of other stores all a stones throw away, something had to give. With the Internet as the last straw, the duck-duck-goose music had to stop at some point. And now comes the reality of many stores left standing without a chair. Toys R Us and Sears are two local retailers I have seen vanish in recent years. In years past it was Borders Books that disappeared. Most areas just cannot support that much product, especially when you factor in the Internet. In the short term, it looks bad to have empty stores. In the long term, it can only be good for consumers. Competition and innovation are good things. Paying cover price for a $49.99 book is dumb when it's $29.00 online. Buying more useless crap for your house that breaks in under a year is dumb. And expecting to have thriving mega retail stores every two miles is just delusional.

When riding horses for transportation switched over to cars it was a bumpy transition. When we transitioned from using whale blubber (can you even imagine?) to oil a lot of whalers were out of jobs. Change and progress is never easy but it's often necessary. We are in a transition right now. What will the end result be? Amazon will likely open more physical stores that are run more efficiently than what we currently know. Some existing stores may adopt change. Some more may vanish. Some may get bought (Whole Foods) and forced to change.

The not-to-distant future will likely have stores stocked by robots, cashierless shopping, and less of what we don't need and more of what we do. I'm sure there will be some false starts, failures, and some as-yet-to-be-seen innovations. The idea of stocking every item, book, toy, and piece of furniture within two miles of your home is coming to a slow and painful death. Many old school retailers refuse to change and it's evident every time I go shopping. My local Target now crazily stocks its shelves all day every day. See the pictures. This has been going on for years now, likely to save money by eliminating extra shifts during the night. Whatever the reason boxes are everywhere in my local Target, it is definitely a financial reason. While the powers that be might think they are being frugal and will come out on top one day, they are mistaken. The messy stores cheapen the brand, make shopping a pain in the ass, and ultimately some boxes are going to topple onto some kid and generate costly negative national news. Boxes that block the aisles and shelves also keeps people from finding things and causes us to want to get out of the messy crowded store fast. I used to love Target. Now I have a love/hate relationship with it. It's not just the mess. It's the half-assed self checkout registers that are way too small and difficult to use if you have a large order with coupons and gift cards. It's the underpaid employees who often don't know anything. And it's the slow reduction in quality and cleanliness. I recently asked a manager at my local Target if I could get a price match for a retro Sony PS One that the rest of the world has discounted down to $60 but Target still had at $99. The manager said I could get a price match at any register. I placed all my stuff on a register. When it came time to price match the item, the guy working there said Target does not price match. Insert facepalm emoji here ➡🤦. Will Target die a slow death by a thousand cuts? Perhaps. Maybe Amazon will swoop in and rescue them. They certainly cannot go on in their current state with boxes scattered everywhere while we try to shop.


Target is not alone. Before they folded, Toys R Us was always a useless pigsty, barely one notch above a warehouse. And Sears seemed to adhere to some old 1950s way of doing things that probably worked well thousands of years ago but no one gets today. I may have gone into Sears now and then but I never actively shopped there. Now my local Macy's seems to have this same chaotic feel. They stuff the store (fire hazard) to the brim with a zillion things, yet there is little in there anyone wants. It'd be better if a clothing store had everything in stock, was way smaller, and let you try it on and then shipped it to you. Less overhead could translate into lower prices and cheap shipping. Problem solved. Shop. Try on clothes that fit. Have them shipped from a central location.

More new ideas are bound to come. 3D printing. Robots. AI. Cashierless stores. Drone delivery. Showroom stores. It's all coming soon. And while the transition might be difficult, in the end it will be better for us, not worse.